These version numbers are not totally accurate… bezzer.co.uk has been online since 1st June 2000 and had many different faces even before version 1. However these are very old and are stored on ‘many computers ago’… lost in a digital recycle bin probably.

These are the latest 6 major versions that I still have in complete working order on my computer (technically since version 5 they don’t work on my computer due to their requirement for server technologies like MySQL and PHP). 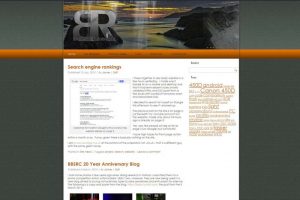 Online from 2011-2020. For a while after updating the site I maintained a blog about computers/gaming, photography and Tasker for Android phones. After a few years work got in the way and blogging never really took off again so the site remained fairly static for most of the time. 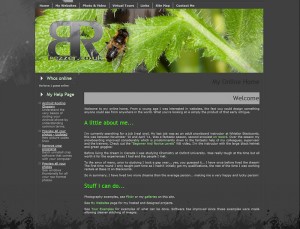 Online at the end of 2009. This is what the site looked like when I was using Joomla. Worked fine but because of the scale of sites Joomla is usually used for it always felt a little empty. You’ll notice the brilliant headers are still in use, although I will be cutting the worst and adding some new ones to version 6. 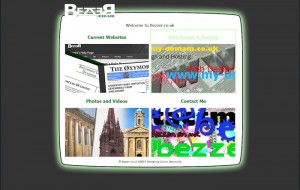 This was live mid-late 2009. My focus then was to try and get hosting business as I had shifted hosting package to a reseller account and had space to fill (still do). The site felt very clean and very very small. Was only really a problem when I wanted to update things as everything was static and the pretty border/background didn’t allow much flexibility on size. 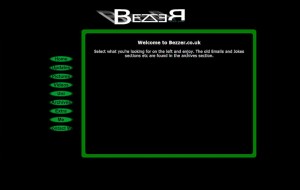 Online around August 2007. I was going for the clean look… #fail. The white on black bit worked fine but the tight green border and cheap feeling flash menu cluttered the page. This was live most of the time I was at university.

Tech: Flash menu and iframe construction for the pages. HTML was clean and simple. 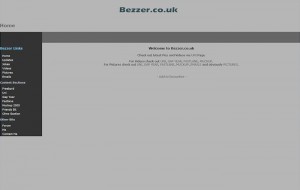 Online around April 2005. Probably the cleanest of the previous looks. Was a graphic overhaul from version 1 but actually the content was exactly the same, think of it more of a template change with extra menu items as time progressed. 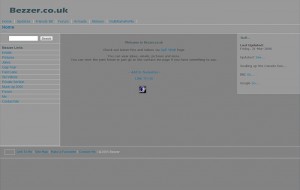 Online around April 2002. From a modern perspective – so many design issues! Without going into detail, what was I thinking with that background? It completely reduces contrast with the text making it much harder to read. Anyway, I was young…

On an up side, I did invent Twitter! Or at least I had a list of updates which were usually no longer than a single line (around 140 characters or so) and they were in effect my boring micro-blog, see below.

Although the content referred to is now unavailable, the string of short boring updates was clearly a muse for the founders of Twitter :-P.

Updated: 25/05/2003
Well so much for the new matrix film!
Well 2 more terrorist of countryside pics!
Loads of new emails since last update.

Updated: 14/05/2003
No more compulsory school EVER for moi
GCSE’s soon yikes!?!, but the pics are still be produced

One Response to Faces of Bezzer.co.uk

We use cookies on our website to give you the most relevant experience by remembering your preferences and repeat visits. By clicking “Accept”, you consent to the use of ALL the cookies.
Cookie settingsACCEPT
Manage consent

This website uses cookies to improve your experience while you navigate through the website. Out of these, the cookies that are categorized as necessary are stored on your browser as they are essential for the working of basic functionalities of the website. We also use third-party cookies that help us analyze and understand how you use this website. These cookies will be stored in your browser only with your consent. You also have the option to opt-out of these cookies. But opting out of some of these cookies may affect your browsing experience.
Necessary Always Enabled
Necessary cookies are absolutely essential for the website to function properly. These cookies ensure basic functionalities and security features of the website, anonymously.
Functional
Functional cookies help to perform certain functionalities like sharing the content of the website on social media platforms, collect feedbacks, and other third-party features.
Performance
Performance cookies are used to understand and analyze the key performance indexes of the website which helps in delivering a better user experience for the visitors.
Analytics
Analytical cookies are used to understand how visitors interact with the website. These cookies help provide information on metrics the number of visitors, bounce rate, traffic source, etc.
Advertisement
Advertisement cookies are used to provide visitors with relevant ads and marketing campaigns. These cookies track visitors across websites and collect information to provide customized ads.
Others
Other uncategorized cookies are those that are being analyzed and have not been classified into a category as yet.
SAVE & ACCEPT
Powered by