Following on from Playing With Light 1, I decided to take more pictures to highlight the difference playing with part 2 and 3 makes to your photos. 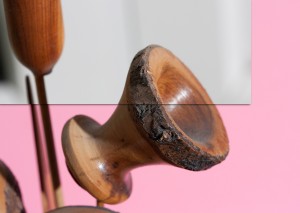 The background to this photo wasn’t particularly messy to begin with, a range of greys and blacks. The addition of the pink paper makes the scene feel more isolated. 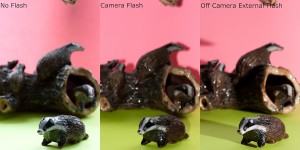 The badger scene is a good example of how different types of flash effect the final photo. In natural light, the photo feels a little washed out as the camera increased exposure to reveal the darker areas (this clearly could be corrected by flicking onto manual). The shadows help to show the shapes of the badgers.

With the camera flash you lose a lot of the natural shadows that helped show the shapes and sizes of the objects. At the same time you are gaining dark shadows directly behind the objects which I find reduces the contrast with the background.

Finally, the off camera flash also removes the natural shadows but creates equally helpful new ones which help show the sizes/shapes of objects. The flash throws enough new light on the scene that the camera exposure is reduced allowing for easier handheld shots and more vivid colours. 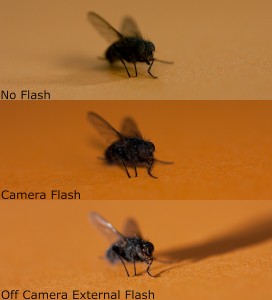 This fly example simply reinforces the points I’ve just made. Natural light has good shadows but lacks pop. The camera flash has plenty of contrast and good colours but the new shadows on the background make the edges harder to see. The external flash is clear and has the benefit of a new dramatic shadow thanks to the light coming from a low angle.

Below are a few of the final images from my mini, playing with light, photo sessions (on Flickr):